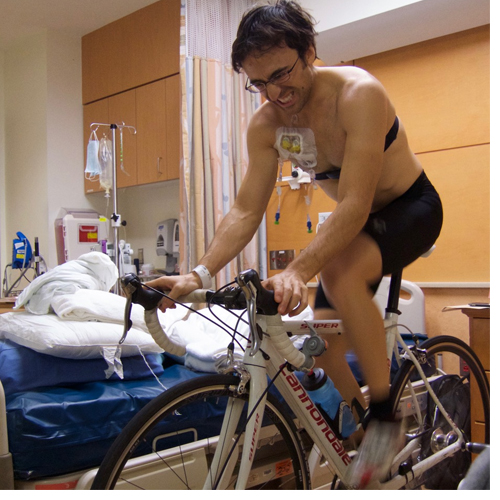 Adventure in the Face of Cancer

At 28 years old, Dave Carbonell was months away from completing his residency in Emergency Medicine at UNC. Then cancer struck – acute lymphoblastic leukemia. Today, after years of intense treatment, he’s cancer free, working as an Emergency Department physician in California and helping other young adults during their cancer journey.

Emergency room physician Dave Carbonell had completed nearly seven years of medical education when he was diagnosed with acute lymphoblastic leukemia (ALL) in February 2012. The symptoms started a month earlier while he was riding a road bike in California, between interviews for his first post-residency job.

“I was used to riding 40-60 miles on the road or two to three hours on trails,” said Carbonell, who was four months away from graduating from the emergency medicine residency program at UNC Hospitals at the time. “But suddenly I felt this pain in my back, and I was riding at a much slower speed than usual.”

He dismissed the initial symptoms as minor, attributing them to being tired from the stress leading up to the interviews and to not adjusting the seat height correctly on the bike, which he’d borrowed. To properly recover, he took a week off riding after returning to Chapel Hill. A week later he got on the bike again, assuming he’d feel better and stronger after the rest. But as he traveled on rural North Carolina roads, he experienced more pain in his back, rode at a slower pace, and became fatigued. He also began spiking fevers. As a resident in the UNC program, he worked 55–60 hours a week in Emergency Departments (ED) at UNC Hospitals in Chapel Hill, WakeMed in Raleigh, and Person Memorial in Roxboro. He’d recently seen patients in the pediatric ED at WakeMed.