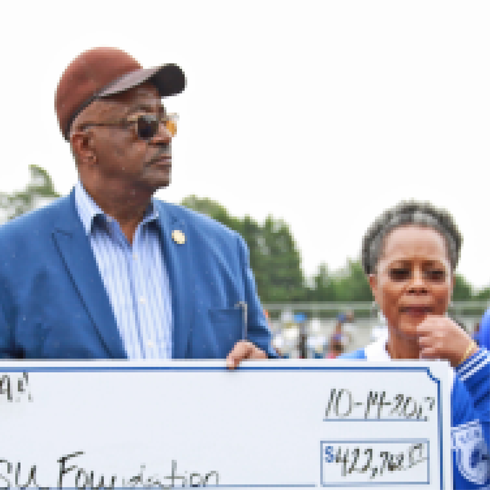 While Elizabeth City State University administrators, faculty, and staff are working to build a solid foundation for the future of the school, alumni are working hard to fill the classrooms with future Vikings.

Last winter the National Alumni Association launched a $10 million initiative, looking to raise the funds over a five-year period to benefit future students. During the 2017 Homecoming game earlier in October, the NAA president, Abdul Rasheed, presented a check for more than $400,000, signaling a successful first-year launch of the initiative.

“This will be history-setting for us (NAA) and significant for the current need of the university,” said Rasheed from his office in Raleigh.

Rasheed, a 1970 ECSU graduate, says the NAA and the various alumni chapters are busy doing their part to boost enrollment. Each winter various alumni chapters bring an estimated 500 high school students to the campus for an open house in hopes of recruiting them as future Vikings. The $10 million initiative will help fund scholarships for those students.