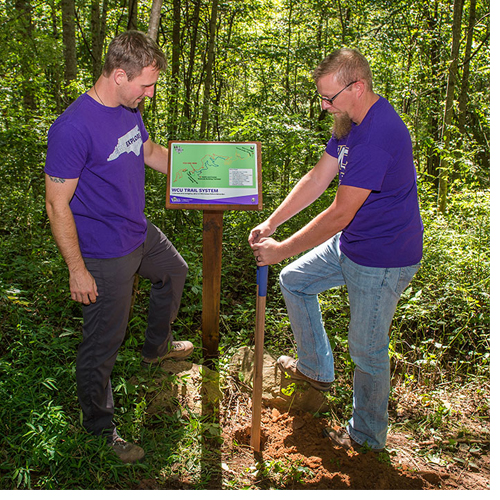 Regular users of Western Carolina University’s trail system don’t have to rely on a calendar to mark the change of seasons on campus. They can see it displayed through the slow-motion appearance of fall colors, the stark grayness of winter when the mountains’ bones are made visible, the explosion of green plant life that comes in spring, and the humidity and growling clouds that hover overhead on typical summer afternoons.

Patrons of WCU’s 6.7-mile trail system also get to bask in another delight – the occasional moment on the system’s far reaches when the hum of distant automobiles evaporates, leaving just the sounds of the surrounding Appalachian forests to stir the imagination.

With the trail system, which includes six separate trails, soon to begin its fifth year as an amenity on the WCU campus, the staff of Base Camp Cullowhee recently has completed several projects designed to improve the experience and improve safety for those who ride, walk and run the trails, said Jeremiah Haas, WCU’s associate director for outdoor programs. The system is managed by WCU’s Department of Campus Recreation and Wellness, which is home to Base Camp Cullowhee.

One of the completed projects involved the creation of a trail map showing topographical features that is displayed on kiosks at the two trailheads, which are located at the entrance to the pedestrian tunnel under N.C. Highway 107 and adjacent to the parking lot of WCU’s Health and Human Sciences Building. Another project done is the installation of numbered GPS waypoint markers about every one-fifth mile along the trails to aid rescuers in tracking down lost or injured users, Haas said.