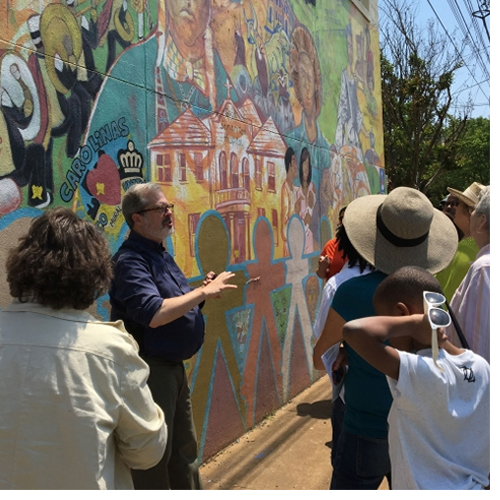 Newcomers and lifelong Charlotteans alike can learn about Charlotte’s secrets and stories during May on free walking tours throughout the city, sponsored by the UNC Charlotte Urban Institute.

The focus of each walk differs, but many explore themes of connection, livability, history and how neighborhoods can maintain their character even as they change through development.

This is the sixth year of City Walks in Charlotte. A project of PlanCharlotte.org – an online publication of the UNC Charlotte Urban Institute – the walks began in 2012 with a single one hosted by local historian Tom Hanchett. This year offers at least 22 walks, with more expected to be added.

“Charlotte City Walks connect people with each other and with our city by letting them learn about their own neighborhood or about a part of the city they don’t know as well,” said Mary Newsom of the UNC Charlotte Urban Institute. “With so many newcomers to the city, as well as concerns about economic inequities, these connections across neighborhoods are particularly relevant.”

This year’s City Walks include tours of well-known neighborhoods such as NoDa, Dilworth and uptown, as well as three of the popular Munching Tours of east Charlotte with Hanchett, where attendees get a glimpse – and a taste – of the cuisines and cultural scene that immigrants have brought to Charlotte’s “salad bowl suburbs.” The tours also include lesser-known and fast-changing areas, such as Revolution Park, Enderly Park and the Belmont neighborhood.