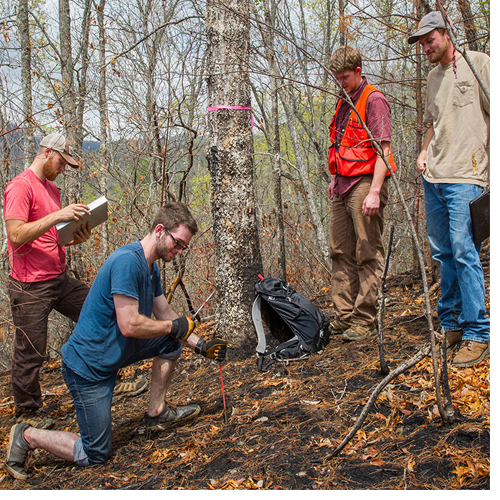 Students from Western Carolina University’s Natural Resource Conservation and Management Program are compiling and analyzing data they collected at the site of a wildfire that scorched part of the Dick’s Creek drainage area near Dillsboro last fall.

Twenty-three students in a spring capstone course have been focusing their attention on four post-fire aspects of the ecosystem – forest composition, wildlife habitat, soil and water, said Peter Bates, associate professor in the program.

“Every year, we want our students to have a chance to work on a real natural resource management problem,” Bates said. “Given the fall fire season that we had and the proximity of the Dick’s Creek fire, we thought this would provide a good opportunity to study the potential effects of the fire. The students draw on things they’ve learned throughout the curriculum, so it is a good test.”

The students separated into smaller groups to work on all aspects of the project including the four focus areas, equipment needs, geo-spatial mapping and preparation of the final report. “Faculty members monitored what was done, but it was very much a student project,” Bates said.