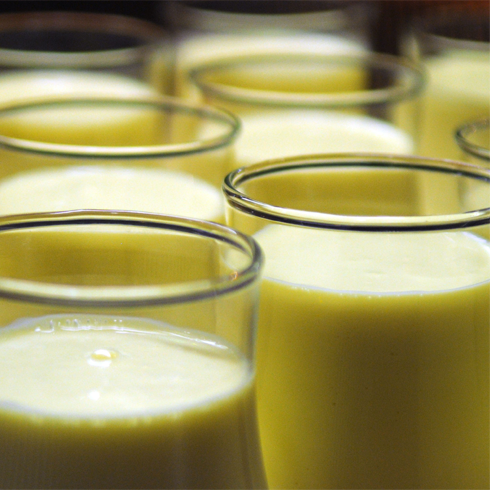 If Eggnog Has Eggs in it, Why Is it Safe to Drink?

Eggnog is a holiday treat, but it contains – surprise! – eggs. So how come it’s okay for us to drink it? Here are a few questions and answers about eggnog and food safety.

If eggnog has eggs in it, and eggs can carry Salmonella, why is it safe to drink eggnog? The eggs aren’t cooked, are they?

“If you’re buying eggnog at the store, the beverage has likely been pasteurized,” says Ben Chapman, a food safety expert and researcher at NC State. “That means the egg-and-milk combination has been heat-treated to kill most of the harmful microorganisms that could make you sick, and reduce the ones that cause spoilage as well.”

Is it safe for me to make my own eggnog?

“Using regular eggs is risky, but you could use pasteurized eggs or egg products,” Chapman says. “Or you could effectively pasteurize your own eggs by slowly bringing the eggnog ‘base’ to 160 °F. The FDA offers advice on how to do that safely.”

Can I use alcohol to make my eggnog safe to drink, or to store at room temperature?

“Ethanol, the alcohol in beverages, should kill some of the pathogens that might be there,” Chapman says. “But the eggnog would still be subject to spoiling, as other hearty microorganisms can multiply and create off flavors.”

Chapman says that using alcohol as a protective measure isn’t a simple venture. Although wine and other clear alcoholic beverages haven’t been linked to foodborne illnesses, a 2010 investigation into exactly what components were protective in wine showed that ethanol on its own wasn’t enough.

Chapman says that in that particular experiment, ethanol provided a 1.5 log (that’s between 90 and 99 percent) reduction in Salmonella in 24 hours. That’s not good if you’re looking to make and serve eggnog, particularly since no reduction in pathogens was seen within the first 60 minutes after adding alcohol. “The cream also complicates things in eggnog as it has fat in it – and high fat environments like peanut butter and chocolate serve to protect Salmonella cells,” Chapman says.

Read the rest of the questions on the NCSU website.