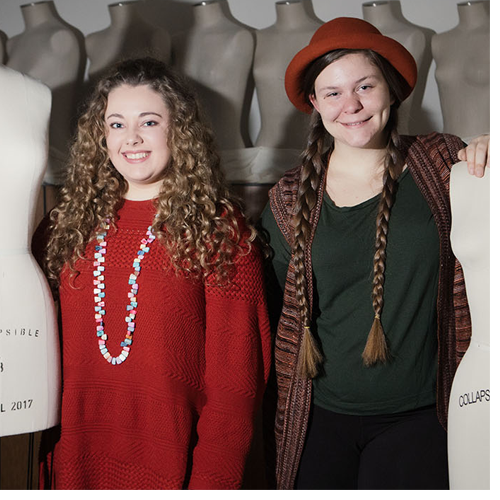 Innovation, surprise win students a place on the runway

BOONE, N.C.—You won’t find “Red Rocks at Sunset” and “Paris City Lights” listed on Amazon Books or as new Netflix series. They are the names of fashion-forward designs that won two Appalachian State University apparel design and merchandising students spots in the opening runway show for an exhibit at the North Carolina Museum of Art (NCMA) that celebrates the clothes, makeup and models of the Ebony Fashion Fair.

For 50 years, the fair has featured African-American models on the runway in haute couture. The NCMA exhibit, “Inspiring Beauty: 50 Years of Ebony Fashion Fair,” is open in Raleigh until Jan. 21.

Sarah Bischoff, a senior from Cary, won second runner-up out of a starting field of 35 student designers from North Carolina universities competing in Project NCMA: Behind the Seams.

She said her design, “Red Rocks at Sunset,” was a couture piece she created with techniques she learned while on an Appalachian study abroad in Paris last spring. The fabric she chose for the modern dress is a color-shifting dupioni silk; the faux pleating is sculpted with boning.