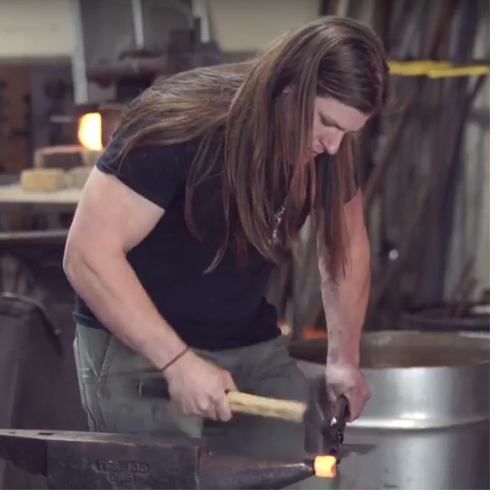 An inspiration "forged in fire"

Blacksmith Brock Martin has yet to make his coolest thing. Or has he?

Martin, a Western Carolina University alumnus, was a recent contestant on the History Channel’s hit show “Forged In Fire.” His episode is part of Season 4 and aired on Tuesday, May 9. Martin advanced to the final round before finishing in second place. You can click HERE to see the show.

Martin, who graduated in 2010 after majoring in entrepreneurship, applied and found out he was going to be a contestant about a year ago.

“It was a really cool opportunity,” the Hickory native said. “I had a lot of fun. I just cut up all the time on the set. I thought I’d be a lot more nervous going into it, but it was pretty second nature being under the pressure, under the gun all the time.”

The show pits four bladesmiths against each other, making various blades and weapons in timed elimination rounds until a panel of judges declares a winner.