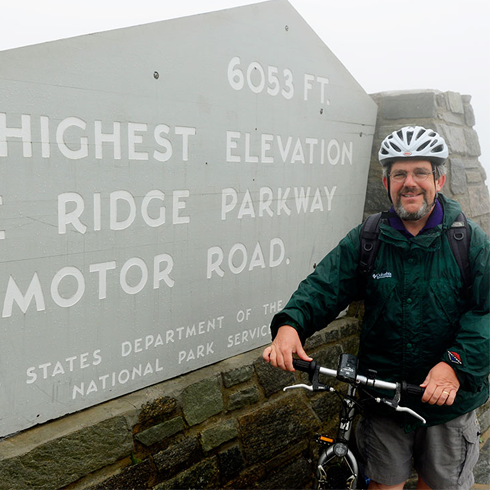 Brian Railsback completed a series of bicycle rides to raise scholarship funds for students enrolled in Western Carolina University’s Honors College back when he was the college’s dean, but now he’s seeking pedal power again and riding for a new purpose in his role as chair of the university’s Faculty Senate.

This time, the primary goal of the journey is to raise awareness of – and maybe a few dollars for – the Faculty Senate’s new Student Support Fund.

Railsback kicked off his latest ride Tuesday, March 6 – during WCU’s spring break – from his home in the Tilley Creek community near campus. He hopes to finish the 345-mile journey to Raleigh by Wednesday, April 4, when he has a 1 p.m. appointment to meet with N.C. Gov. Roy Cooper.

Railsback is working on the biking project in segments to avoid missing class time. He rode to Morganton over a four-day span during spring break, taking the scenic route – the Blue Ridge Parkway – from Balsam to Asheville. He returned to the road Sunday, March 18, to ride from Morganton to Newton, bringing his mileage total so far to 150.