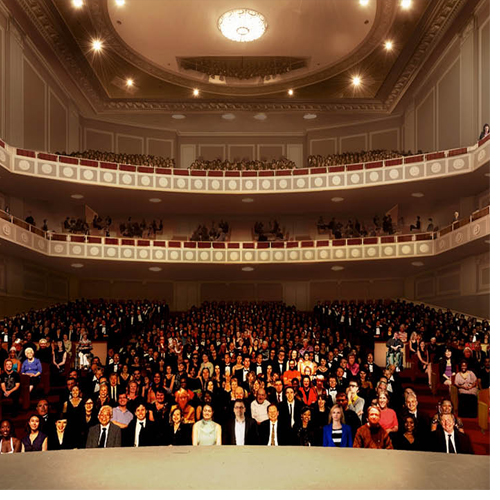 Renovation of Stevens Center moves a step closer to reality

The University of North Carolina School of the Arts (UNCSA) moved one step closer to renovating the Stevens Center in downtown Winston-Salem today when its Board of Trustees unanimously approved a concept master plan for the facility built in the 1920s at the corner of Fourth and Marshall streets.

The preliminary plan lays the groundwork for turning the aging facility, which was last renovated in 1983, into a world-class performing arts venue that benefits the students who train and perform there; partner organizations such as the Winston-Salem Symphony, Piedmont Opera and the National Black Theatre Festival; and the local economy.

Chancellor Lindsay Bierman, who presented the plan developed by world-renowned Robert A.M. Stern Architects (RAMSA) of New York in conjunction with DLR Group of Charlotte, cautioned that actual renovation is still years away. “This concept master plan provides a detailed analysis of existing conditions, reflects the ‘must-haves’ of most campus and community stakeholders, and outlines realistic cost estimates to bring the facility up to current industry standards and building codes,” Bierman said. “But it’s much too early in the process to think about construction documents or detailed floor plans. We have to figure out how to pay for it first!”

Bierman sees the Stevens Center as the anchor of a downtown arts and entertainment district. “Performing arts centers drive economic growth in cities,” he said. “Here in the ‘City of Arts and Innovation,’ I’d like to see UNCSA lead the branding and development of a vibrant ‘Arts Quarter’ to complement what Wake Forest University has done so brilliantly and beautifully in the city’s Innovation Quarter.”