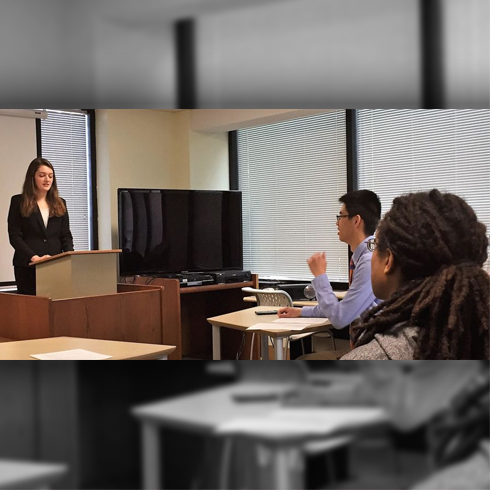 After spending a year designing and conducting their own research projects, Research in Biology (RBio) seniors take on a new role in the fourth trimester of the RBio class, serving as mentors to the new juniors, who are just beginning their research journey. “The first trimester of RBio is all about building the foundation upon which students can build skills, initiative, and drive that is necessary for the eventual development of their research projects,” explains RBio senior Chiamaka Okonkwo.

One favorite activity is the scientific fraud lesson, where students have to role-play an actual scientific fraud trial, debating what constitutes fraud, and discovering the pressures scientists face. Building upon this activity, RBio instructor, Dr. Amy Sheck, suggested that it would be interesting to explore a particularly relevant case: the Flint Michigan water crisis. The RBio seniors were tasked with designing an interactive lesson centered on the Flint water crisis, but were given minimal further direction.

In order to gain a full understanding of the crisis, the seniors first read many articles about Flint. While many of the seniors had some background in the water crisis, they were surprised to learn about the complex interactions between science, politics, and law that intertwined to worsen the disaster. In April 2014, the city of Flint, Michigan, switched its water supply from Lake Huron to the Flint River. The water in the Flint River is more corrosive than Lake Huron’s water, which caused lead from the lead pipes to leach into the water supply. This led many citizens, particularly children, to have dangerously high blood-lead levels, causing them to suffer serious health consequences. The water crisis was aggravated by the inaction and mistakes of both local and federal government officials, and was brought to the public eye by scientists, who risked their careers to advocate for the citizens of Flint.