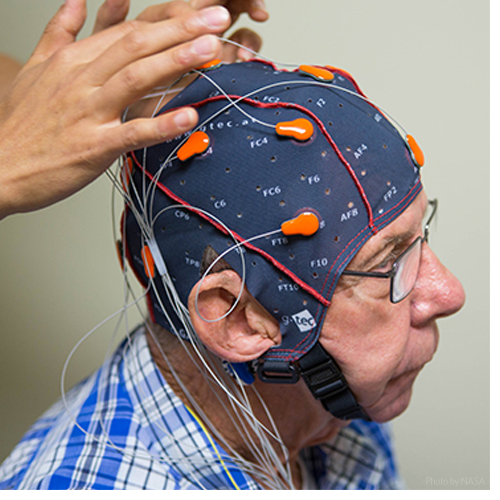 A faster and non-invasive way to identify dementia in senior citizens just might come out of Goldsboro, North Carolina through a collaboration between ECU researchers.

ECU's College of Engineering and Technology, with assistance from ECU's College of Nursing, is currently studying whether a proposed technology platform can help doctors pinpoint whether a patient has mild cognitive impairment (MCI) that can lead to dementia and Alzheimer's. The platform uses existing open-source software and electroencephalogram (EEG) testing to capture the brainwaves of research subjects who either have Alzheimer's (or dementia) or who don't show symptoms.

Using a skull cap with 16 electrodes which detect brainwave signals that are fed into a computer for further analysis, researchers can administer a visual test to see how fast and strong a patient's preconscious reaction is to seeing a familiar human face, an unfamiliar human face and a watch face.

Dr. Sunghan Kim, assistant professor of engineering, is the lead investigator of the research. He's hoping the data collected will show the recognition discrepancies that could ultimately lead to early detection capabilities, such as the platform he's currently testing.