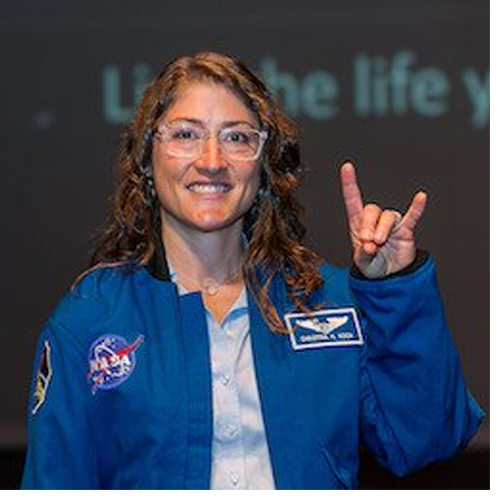 It’s been almost five years since Christina Hammock Koch was chosen by NASA to be an astronaut. She’s completed the initial two-year training program for all new astronauts, and is in regular contact with the astronauts aboard the International Space Station.

But she’s still waiting for her first mission, the order that will trigger additional training and an eventual trip into space.

Not that Koch, who earned two bachelor’s degrees and a master’s degree at NC State, is complaining. She keeps busy with ongoing training, work that she does in mission control in Houston and outreach efforts (including a popular Instagram account) to help the public understand the life of an astronaut and the work of the space program.

“No mission yet,” Koch said when we caught up* with her on a recent visit to NC State. “No one has gone to space yet in the 2013 class, but two out of the eight have gotten a mission assignment. So the ice has been broken. The wheels are in motion — it’s happening.”

It is likely that Koch’s first mission, when it comes, will be a stint on the International Space Station. Koch studied electrical engineering and physics at NC State and worked in remote locations such as Antarctica and Greenland before she became an astronaut. And one of her periodic jobs now is to work as a CAPCOM, or “capsule communicator,” in NASA’s mission control.