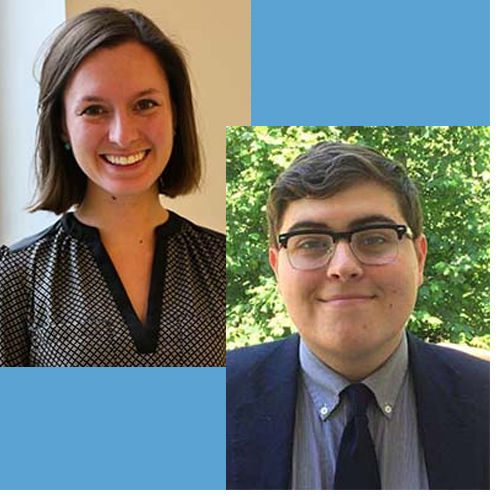 Alexander Peeples, a UNC-Chapel Hill senior, and Shauna Rust, a 2016 graduate, have been named recipients of the George J. Mitchell Scholarship, which supports graduate studies in Ireland.

Peeples and Rust were two of 12 Americans selected Nov. 18 for the award, which provides tuition, accommodations, a living expenses stipend and an international travel stipend for one year. They are UNC-Chapel Hill’s sixth and seventh Mitchell Scholars since the program began in 2001.

“Being named a Mitchell Scholar is an exceptional achievement and we are incredibly proud of both Alexander and Shauna for receiving this outstanding honor,” said UNC-Chapel Hill Chancellor Carol L. Folt. “Both students have shown their dedication to academics and giving back to our campus and local communities, stepping stones to success Alexander can use as he works to advance the field of education law in the developing world with a particular focus on our most vulnerable populations and Shauna as she works to create a healthier world particularly for those most in need.”

Peeples, 21, from Mobile, Ala., is the son of Steven and Larene Peeples. He graduated from the Alabama School of Math and Science in 2014. Peeples will graduate in May 2018 with majors in history and political science and a minor in African studies.