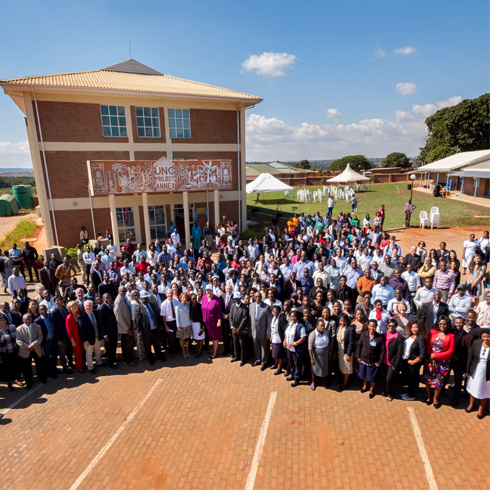 UNC’s work in Malawi began more than 20 years ago with a small team working out of a single rented office on the second floor of the Dulux Paint Building in Old Town Lilongwe. From those beginnings, the dedicated scientists and staff at UNC Project-Malawi have led research studies that changed the course of global health, trained a generation of Malawian physicians and scientists, provided transformative learning experiences for UNC students, and helped to improve the health care infrastructure of the southeast African nation.

UNC has over time expanded from that single small office to around 75,000 square feet of research and clinical space, spread across the campus of Kamuzu Central Hospital as well as other locations in Lilongwe. From labs in Lilongwe, UNC Project-Malawi researchers helped lead the HIV Prevention Trials Network’s 052 study, which showed that early treatment of HIV with antiretroviral therapy could reduce sexual transmission by 96 percent. That international study led by Myron Cohen, MD, Associate Vice Chancellor for Global Health, and Director of the Institute for Global Health and Infectious Diseases, was named Breakthrough of the Year by Science  in 2011. Further work has greatly reduced the rates of mother to child transmission of HIV. Now, overall rates of new infection in Malawi are way down, and antiretroviral therapy adherence has greatly increased.

From the foundation of groundbreaking and life-changing infectious disease research, UNC now supports clinical care and education in disciplines including cancer, surgery and women’s health.