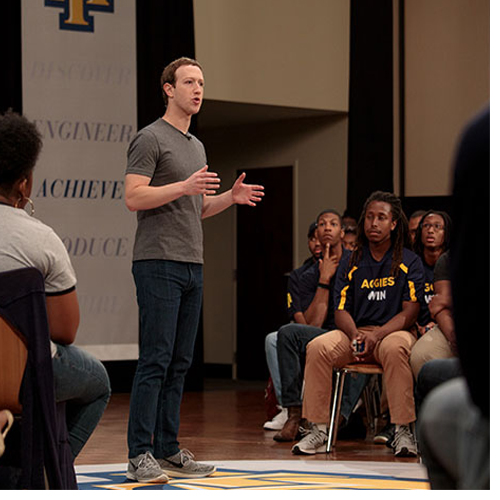 From exploring the role social media can play in healing America’s divides to increasing diversity in the tech industry to combatting Islamophobia online, North Carolina Agricultural and Technical State University students engaged Facebook founder and CEO Mark Zuckerberg in a wide-ranging and thoughtful conversation as part of the inaugural Chancellor’s Town Hall on March 13.

The new series was created to bring nationally distinguished guests to Greensboro for dialogue on matters of current and abiding importance to the campus community and the world beyond. Securing the leader of the platform that was the catalyst for the global social media revolution as the debut speaker made for an exciting start to what promises to be a consistently high-impact forum.

Casual in jeans and a t-shirt, Zuckerberg spoke from a “theater-in-the-round” space in the Alumni Foundation Events Center, a giant A&T logo prominently decorating the floor, with nearly 200 of A&T’s best and brightest students seated around him. But thanks to Facebook Live and the archive of the broadcast, the event was seen by many more users around the world – 3.65 million and counting, as of this writing.