Thomas E. H. Conway, Jr., who has served as interim chancellor of Elizabeth City State University since January 1, 2016, has been elected to the position on a permanent basis by the Board of Governors of the 17-campus University of North Carolina. The appointment is effective immediately. 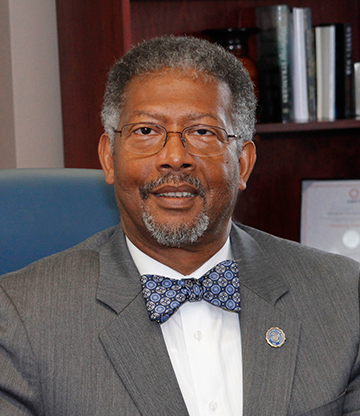 With the endorsement of the ECSU Board of Trustees, UNC Interim President Junius Gonzales placed Conway’s name in nomination today (January 26) during a special meeting of the Board of Governors held in Chapel Hill.  Conway, who had previously served as vice chancellor and chief of staff at Fayetteville State University, succeeds Stacey Franklin Jones, who stepped down from the post on December 31.

In recommending Conway to the Board of Governors, Gonzales said:  “Thomas Conway is a proud product of the University of North Carolina system, and he has devoted his life’s work to it.  Over the past four decades, he has distinguished himself as senior administrator on two other UNC campuses, and he brings to ECSU a deep understanding of the mission, purpose, and promise of UNC’s historically minority institutions.  I am convinced that he is the right individual to lead ECSU for the long haul, and that belief has been enthusiastically affirmed by the ECSU Board of Trustees.  Dr. Conway’s knowledge of the region, extensive administrative experience, and sound judgment will be critical assets as we work together to ensure ECSU’s long-term success.  We are most fortunate to retain a proven leader of such talent, integrity, and commitment.”

ECSU, which serves one of North Carolina’s most economically disadvantaged regions, has faced a series of enrollment and financial challenges.  Over the past five years, headcount enrollment has declined by more than 50%, and state appropriations and tuition revenues have been reduced by nearly $10 million, or 21%.  Those losses would have been greater without $3 million of short-term stabilization funding provided by the 2015 General Assembly. Contributing factors have included the implementation of tougher UNC minimum admissions standards, state budget cuts throughout the recession, declining tuition revenues, and reputational challenges stemming from key operational deficiencies.

Conway, 66, has served as vice chancellor and chief of staff at Fayetteville State since 2008.  In that role, he has had primary responsibility for advancing university priorities and coordinating and implementing the strategic planning process.

Prior to joining Fayetteville State’s senior leadership team, Conway served as dean of undergraduate academic programs at NC State University (2005-08).  In that capacity, he worked with faculty and administrators across all colleges and departments to enhance the quality of the academic experience for NC State undergraduate students.

During his 32-year tenure at NC State, Conway also served as vice provost for enrollment management and services (2002-05), associate vice provost for the Division of Undergraduate Affairs (1998-2002); and director of the First Year College (1998-2000). He earlier served as a counselor in NC State’s University Counseling Center, Trio Program director, director of the academic support program for student athletes, and director of recruiting and minority services for the College of Engineering. He also was a visiting lecturer in the NC State College of Education’s department of counselor education.

Conway holds an undergraduate degree in agricultural education (1971) and a master’s degree in guidance and counseling (1976) from NC A&T State University and earned a Ph.D. in counselor education from NC State in 1994.

Active in a number of professional organizations, Conway has served as a consultant for numerous historically minority institution and has written and spoken widely about academic assessment, mentoring and leadership.  At the UNC system level, he has served on the UNC Military Affairs Council and the UNC Task Force on Athletics and Academics.

A native of Louisburg, NC, Conway is married to the former Mychele Jenkins of Hollywood, Florida, They have two adult children: Simon, a middle-school teacher in the Washington, D.C. public schools; and Zena, who works for a conference management company in Charlotte.

The oldest public university in the nation, the University of North Carolina enrolls nearly 225,000 students and encompasses all 16 of North Carolina’s public institutions that grant baccalaureate degrees, as well as the NC School of Science and Mathematics, the nation’s first public residential high school for academically gifted students.  UNC campuses support a broad array of distinguished liberal-arts programs, two medical schools and one teaching hospital, two law schools, a veterinary school, a school of pharmacy, 11 nursing programs, 15 schools of education, five schools of engineering, and a renowned arts conservatory.  The UNC Center for Public Television, with its 11-station statewide broadcast network, is also under the University umbrella.

Located in Elizabeth City along the northern coast of North Carolina, Elizabeth City State University (www.ecsu.edu) provides an academically rigorous, stimulating learning environment and a faculty committed to the education of each student. With 28 undergraduate and 4 graduate programs of study, ECSU offers degrees in aviation and natural sciences, business and economics, teaching and administration, visual and performing arts, mathematics and computer science, social and behavioral sciences and other select professional and pre-professional areas.

As a constituent institution of the University of North Carolina, ECSU is the most affordable academic success university in North Carolina. Our intimate class sizes afford our student body a small, yet challenging learning environment. We teach, train, and mold our students in an environment representative of today’s global economy.