UNC President Emeritus Thomas W. Ross is the 2016 recipient of the University Award, the highest honor given by the Board of Governors of the 17-campus University of North Carolina. Board Chairman Lou Bissette of Asheville presented the award, which recognizes illustrious service to higher education in North Carolina, during a banquet held Thursday evening (May 26) on the UNC-Chapel Hill campus. 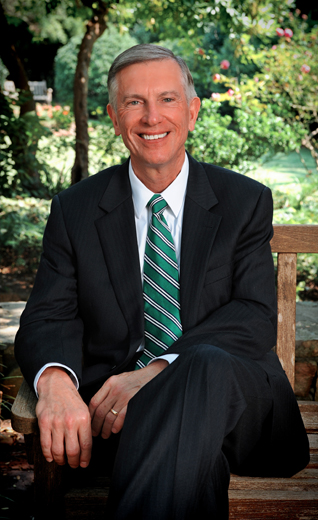 Born and raised in Greensboro, Ross is a graduate of Davidson College and the UNC-Chapel Hill School of Law. By 2011, when he succeeded Erskine Bowles as UNC President, he already had built an enviable record of service to the residents and institutions of the state. He had previously served as president of Davidson and executive director of the Z. Smith Reynolds Foundation, spent 17 years on the bench as a Superior Court judge, and served as director of the NC Administrative Office of the Courts.  He also had practiced law, served as a congressional chief of staff, and served on the faculty of the UNC-Chapel Hill School of Government.

Along the way, Ross served on the boards of Davidson College, the Center for Creative Leadership, and the North Carolina Independent Colleges and Universities. He also served on advisory boards for the John S. and James L. Knight Foundation, the NC Humanities Council, and the NC State University Institute for Emerging Issues. A former chairman of the UNC Greensboro Board of Trustees, he has previously served on the Boards of Visitors for UNCG, UNC-Chapel Hill, and Wake Forest University. In addition, he has served on the boards of the North Carolina New Schools Project, the Kenan Institute for the Arts, the Institute of Government Foundation, the UNC-Chapel Hill School of Law Alumni Foundation, and the Wake Forest Comprehensive Cancer Center.

As UNC President from 2011-2016, Ross maneuvered the University through very challenging economic times, including the allocation of some of the largest budget cuts in UNC’s history. He recommended new chancellors for 11 UNC campuses; led the implementation of a five-year strategic plan; and broadened system-wide efforts to maximize efficiencies, expand online offerings, promote more shared services, and increase private fundraising.

Ross also greatly improved collaboration and coordination between the UNC and NC Community
College systems and expanded UNC system efforts to serve military affiliated students and veterans.  He helped resolve a series of crises impacting UNC campuses and affiliates, established financial and other reporting requirements to help ensure the integrity of intercollegiate athletics programs, and established the UNC Campus Security Initiative to explore ways to make UNC campuses safer.  In collaboration with the Community College System and the state’s private colleges and universities, he also commissioned the first statewide analysis of the economic impact of higher education in North Carolina, affirming that UNC is a critical source of talent and key economic driver for the state economy.

Ross’ many previous honors include the Rehnquist Award for Judicial Excellence, Distinguished Alumni Awards from both Davidson and the UNC-Chapel Hill School of Law, the UNC-Chapel Hill Alumni Association’s Distinguished Service Award, UNCG’s Charles Duncan McIver Award, and the Echo Foundation’s Award Against Indifference.  He also holds an honorary doctorate from UNCG.

Shortly after leaving the UNC Presidency, Ross was named the first Terry Sanford Distinguished Fellow at Duke University’s Sanford School of Public Policy. On July 1, he will become President of the Volker Alliance, a non-partisan organization based in New York that works to advance effective execution of public policies and to rebuild public trust in government.