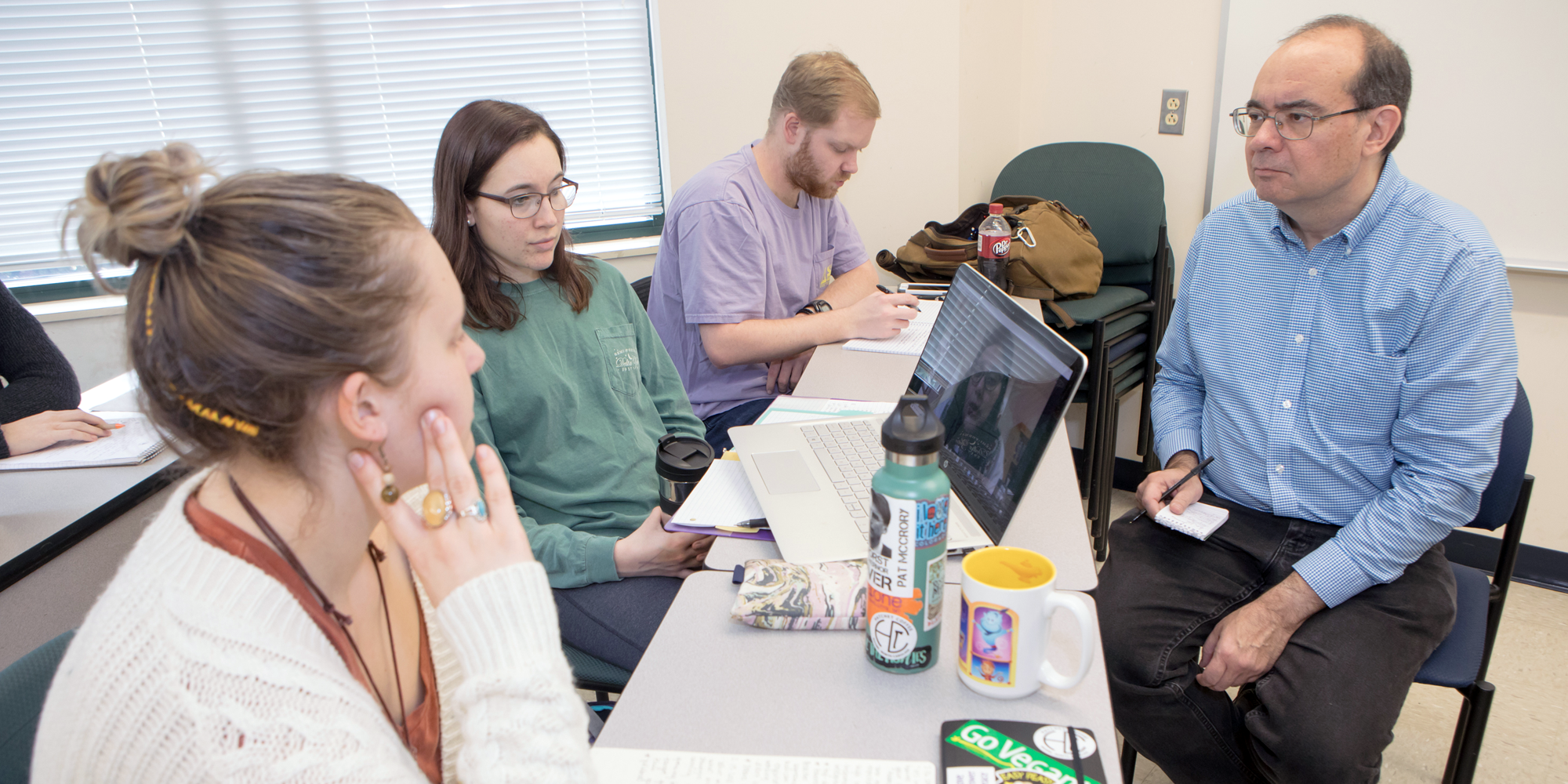 ‘Peacebuilding in a tangible way’

Appalachian State University is building on a United Nations program to challenge global prejudice and create more peace and justice in the world.

Called the Global Peacebuilding Project (GPP), Appalachian’s initiative brings continuity to the U.N. Diversity Contest conducted in 2015-16, in which 10 college students (undergraduate and graduate) from around the world were given 20,000 euros each to implement their creative proposals to address sexism, racism, religious conflict, homophobia and other biases in their home communities. The winners represented countries in Africa, the Americas, East Asia, South Asia, Europe and the Middle East.

There are ways that we alone, as individuals, can use creativity and compassion to change our communities for the better. -Kylie Holloway, sustainable development major

The former U.N. globalization specialist who led the original U.N. Diversity Contest, Dr. Martin Schoenhals, now teaches at Appalachian. The university’s GPP is organized by Schoenhals, the Office of International Education and Development and a campuswide GPP Committee comprising faculty, staff and students.

“Appalachian is exactly the sort of heartland institution that the U.N. seeks to continue this work,” Schoenhals said. “The goal is to promote peacebuilding and anti-bigotry work at Appalachian in a way that can be a model for other universities.”

“Just as Appalachian has led the way in modeling for other institutions how a university can promote sustainability, it can also model how to promote peacebuilding in a tangible way,” said Schoenhals, who has taught international studies at Columbia University and Johns Hopkins University.

Appalachian’s GPP is being developed in phases:

Professor Martin Schoenhals (in blue shirt) leads students at Appalachian State University in a videoconferencing interview with U.N. Diversity Contest winner Atenea Rosado, of Mexico, as part of a spring 2018 course titled Global Diversity Project. The course is part of a larger Global Peacebuilding Project that Appalachian is launching to challenge global prejudice and create more peace and justice in the world. Photo by Marie Freeman.

Dr. Jesse Lutabingwa, associate vice chancellor for international education and development, said, “At Appalachian, we continuously work on three areas of our strategic plan that intersect and reinforce one another: sustainability, diversity and global learning. The Global Peacebuilding Project strengthens all three strategic initiatives while empowering young people in their desires to reduce prejudice and build a more just and equitable world.”

The GPP allows a bottom-up approach in designing comprehensive peacebuilding, Lutabingwa said, and if a student project from the contest truly stands out, it could be scaled up to become a universitywide initiative.

Schoenhals said the original U.N. contest design and Appalachian’s iteration are special in that they give nonpaid, nonprofessional people — rather than established NGOs or other groups — the opportunity to create projects supporting peace and justice.

Among the 2015-16 U.N. projects, a woman from rural Pakistan wrote a curriculum designed to teach children about the religions in her village — Islam, Christianity and Hinduism — and how to coexist peacefully. In another project, a team of Mexican students recorded voices of immigrant women in the U.S. and Mexico to humanize the issue of immigration for policymakers and others. A third project involved the making of three short films displaying harassment scenarios, which were shown randomly in public spaces in Mexico City to increase awareness and sensitivity.

Sophomore Kylie Holloway, a sustainable development major at Appalachian, said she found the videoconferencing interviews she and her classmates undertook with the two U.N. winners in Mexico to be “very thought provoking and inspiring.”

“The goal is to promote peacebuilding and anti-bigotry work at Appalachian in a way that can be a model for other universities.” -Schoenhals

She was interested in taking the course taught by Schoenhals “because of its premise to address forms of prejudice and hatred in communities, and the different actions that can foster greater understanding, peace and acceptance among all people,” she said.

“This is something I am very passionate about in my life outside of school, and to have an opportunity to learn about and discuss this topic in an academic setting sounded incredibly powerful,” said Holloway, who would like to develop a project to address homophobia in North Carolina.

The course is cross listed between the Honors College and the Department of Sustainable Development because of its interdisciplinary and international focus, as well as its emphasis on community engagement.

From her conversations with the U.N. winners, Holloway has learned “there are a lot of people, in this country and in this world, filled with immense hatred,” yet also others “making changes, spreading love and promoting peace daily,” she said.

“This gives me hope,” Holloway said. “There are ways that we alone, as individuals, can use creativity and compassion to change our communities for the better.”