Reyes, who was a standout at the North Carolina School of Science and Math in Durham, was able to enroll in a special physics program at North Carolina State University, thanks in part to Blondin, the alumni distinguished professor in physics at the university.

“We run a summer program in computational astrophysics, and Mia had been accepted to NC State,” he said of the 10-week program, which has just eight spots for students. “We tried to nudge her here by offering her a position in the program. We throw out a bunch of projects to them, and in the first two weeks, they have to choose a project and write a proposal. Mia took on a very challenging project of studying turbulence in the core of supernovae.”

The pair have collaborated on a project called “Supernova Turbulence,” which de los Reyes has presented on more than one occasion, including to the University of North Carolina Board of Governors at its regularly scheduled meeting in October. Now a senior at NC State, de los Reyes has been working on it since her freshman year, with Blondin serving as her advisor.

The research looks into how a supernova explodes and what role turbulence plays in that process. 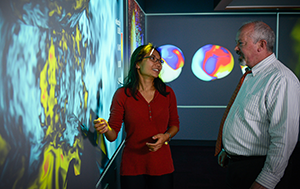 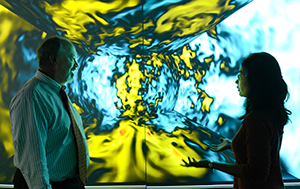 de los Reyes and Blondin have collaborated on a project called “Supernova Turbulence,” which de los Reyes has presented on more than one occasion.

She said Blondin’s work studying supernovas helped her develop the idea to study how turbulence can affect the explosion.

“Mia did exceptionally well, so I was trying to keep her on that project as long as she was interested,” he said. “We got her involved running three-dimensional simulations on a supercomputer to keep that project going.  I was very impressed in how fast she picked up this whole thing as a freshman in college.”

De los Reyes showed interest in astrophysics while still in high school, and took a class about it during her senior year. She had done so as part of her preparation for the Science Olympiad competition, but “I found out I really liked it.”

“I like the idea of studying something that’s so much bigger than yourself. For me, I always enjoyed the whole Carl Sagan aspect of it,” she said, referring to the famed scientist who created the educational TV program “Cosmos.”

“She has taken advantage of lots of opportunities to do research,” Blondin said. “She spent summers at the Large Hadron Collider in Switzerland, she spent the summer at the Space Telescope Science Institute at Johns Hopkins University, and she’s done some other projects. What I’ve seen over the four years is that Mia has really found her passion, she wants to do observational galactic astronomy. Compared to the freshman I first met, she’s very confident young woman and knows that she’s capable of doing anything she sets her mind to do.”

She’s poised to do even more work as an astrophysicist once she finishes her undergraduate degrees in math and physics, and would like to become a mentor herself to the next crop of budding science students. She’s going to graduate school to study astronomy or astrophysics, but hasn’t decided on which school yet.

“Undergraduate research played a big part in my development as a scientist, but you also gain a lot of personal skills from research,” she said. “I would definitely like to continue to do research. I would really like to work somewhere like the Space Telescope Science Institute in Baltimore. It’s affiliated with Johns Hopkins University. I haven’t had a lot of time to do a lot of teaching, but I like the mentorship aspect. Looking back over my last few years at NC State, mentorship has played a very important role. So I think it’s important to give back and help inspire or encourage the next generation of scientists.